Note: This article is cross-posted on Medium.

Recently, the research and development company Battelle released a video of what is claimed to be the first non-ballistic anti-drone gun, the DroneDefender. The video has garnered much attention in both traditional and social media. Here I am going to explain why the DroneDefender is effectively a comfort blanket against a messy and uncertain future, a symbolic weapon hiding behind a convenient cowboy archetype.

The Battelle DroneDefender ‘in use’. Image from promotional video.

Battelle released two videos to promote the DroneDefender. The first is a glossy dramatisation of a drone being spotted, and disabled by an alert security team. The video combines action shots and PowerPoint-style infographics, and is clearly designed to sell the concept to military, state and private security forces.

The second is the B-roll (first seen on Motherboard). This is the unedited source footage, before the vignetting, graphic overlays and quick cuts had been put in. It struck me as an odd choice of videos to make public, as it clearly reveals the constructed nature of the main promotional video. In this regard, it is more honest. The DroneDefender is not FCC certified, so the video is a simulation. The B-roll makes this absolutely clear, from the security guard struggling to keep up with a drone clearly being piloted from elsewhere, to the shaky footage and retro pans and zooms. (The ‘this is a simulation’ message doesn’t always make it onto web articles, which often present the device as an item available now, or very soon.)

In the video, it is implied that this is a one-man ‘solution’ to the threat of drones. This threat is wholly unimaginative: it hinges around the idea that the most nefarious use for a drone is the hobbyist taking unauthorised videos or photos of a secured area. Whilst it is true that the majority of civilian drones are likely to be used for photography (or even elaborate selfies), and the ability for anybody to buy a piece of equipment that allows them to fly a camera above anything does raise real privacy and security concerns, there are further issues that have far more material consequences.

Raffaello D’Andrea showing drones working together. 21 minutes into the lecture he talks about collective behaviour, learning and the threats that drones pose.

There is much laudable research going on with drones at present. Teams of researchers at ETH are actively working on control systems that enable drones to work together to achieve larger goals than a single drone could achieve. Raffaello D’Angelo and Gramazio Kohler’s teams have programmed drones to collectively throw and catch balls, build walls, and more recently, build a rope bridge. Marshmallow Laser Feast programmed drones to dance. All of these have potentially far-reaching impacts on a variety of industries.

At the end of his lecture at the Bartlett School of Architecture in 2012, drone pioneer Raffaello D’Angelo instigated a discussion about ethics and drones. At present, he said, cheaply available commercial drones can carry approximately 2kg. This has increased significantly from the amount the first ones could lift, and will surely increase over time. And, at present, the software to enable drones to work together relies on external computers and control systems, but there is no reason to believe that the hardware and software will not be drone-mounted in the future.

Both are hypothetical at the moment, although the company Mountain Drones claims that it will soon use drones carrying explosives to instigate avalanches, and there have been numerous reports of drones carrying ‘payloads’ of contraband across borders and into prisons. And surely it is only a matter of time before a Hollywood film features a swarm of cooperating, net-wielding drones swooping down to kidnap a high net worth CEO…

How would the DroneDefender fare in the above scenarios? In short, terribly. The DroneDefender has a 30º field of operation, and a 400m range, and essentially works by jamming the signals between the drone and its user and the drone’s GPS signal. In most instances, this causes the drone to simply land at a safe speed, so that its owner can retrieve it (there are tales of drones being launched from yachts, losing their wifi signals and ‘safely’ landing in a watery grave). However, in the event that somebody has strapped explosives to a drone, the last thing that one would want to do is force it to land – particularly if the explosives were contact-detonated, or worse, programmed to detonate in the event of losing signal.

A single disabling agent with a 30º field of range would likely have minimal effect on a swarm of drones. In the video, the drone is disabled at approximately a 15-metre range. This means that a second drone flying parallel 7.75 metres away— or about one and a half car’s lengths — would be immune to attack. In any case, the designer of a drone-swarm would likely build in redundancy, so that a few drones could be disabled without adversely affecting the eventual result (much like the redundancy in swarms of insects, mesh networks and networked drives). One man armed with one gun, able to down one drone, would have little effect.

So the DroneDefender is only an effective weapon if our security guards are trying to stop one hobbyist pilot from flying a photography drone into a restricted area, within visible sight of security guards. (Other issues: ensuring the drone gun is charged and accessible; that the staff are trained in its use and protocols; that the drone is sighted before it enters the restricted area.) All in all, I would argue that the DroneDefender fits a very specific niche.

In recent years, technology has been a major driver of change in the economy. With increasingly widespread aprehension of technologies that represent an uncertain future — from Stephen Hawking, Bill Gates and Elon Musks’ claims that AI could be ‘our greatest existential threat,’ to worries about children being unable to hold conversations — it is clear that we are facing societal challenges that have not been faced before.

I believe that the majority of people see this new technology as a fait accompli — that is, that they have no control over its direction, and that in many cases it stands a very real chance of taking their jobs.

These fears are mirrored in the fragmented wars that the West is fighting; there are no clear narratives, and uncertain enemies and alliances. We have been trained to be alert for dangers and threats which may not exist, to perpetually think that something terrible might happen. 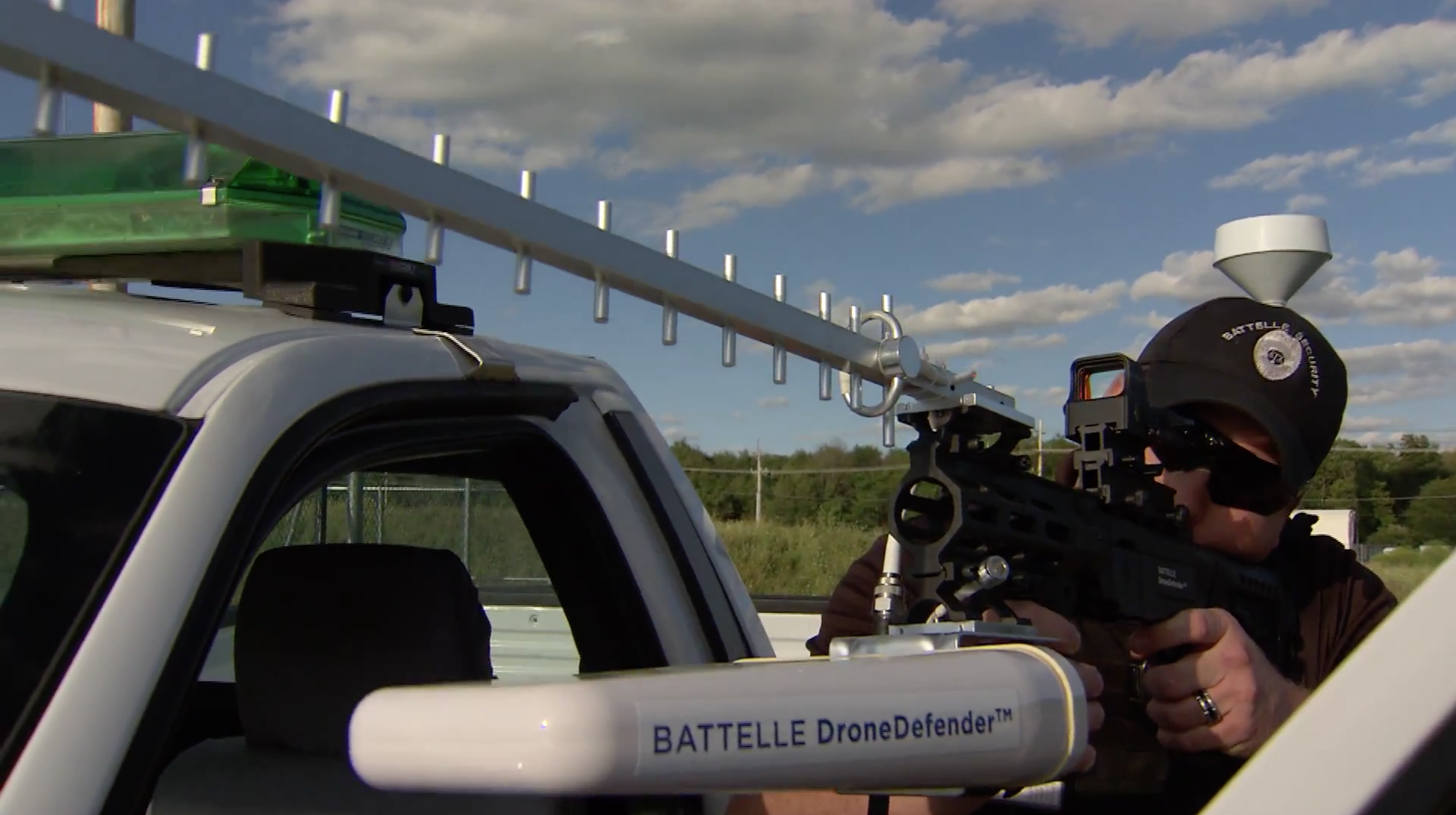 If the DroneDefender is not effective as a literal defence mechanism, its symbolic value must not be overlooked. In the video, we see a ‘hero’ figure shoot a drone out of the sky. The drone represents an uncertain, unseen enemy, and a technological future we can’t control. It is no coincidence that the DroneDefender, which houses no ballistics-delivery-system, is shaped like a gun. Battelle have resurrected the cowboy archetype, the lone hero standing up for freedom, wielding a large weapons and restoring order.

The cowboy is a definitive American archetype. A lone hero, his origins are in stories of King Arthur, and his roots can be traced to Greek Stoicism and Homeric warriors. Early Hollywood liked cowboys because they gave rise to simple stories of good and evil, and the character stuck. They allow an audience to root for a single character who they imbue with characteristics they believe in. They come with pre-made enemies, characters who are undeniably bad, who can be killed with a single shot in the middle of town at high noon. More often than not, the hero saves the day before wandering off into the wilderness, presumably to repeat the feat in town after town.

This story is compelling because it is simple. A man holding a gun that shoots down a drone is simple. The reality of the issues that he is really facing is anything but simple. In an age of networks, the narrative of the cowboy-saviour having an ability to halt the waves of unwanted progress, or being able to definitively disable an enemy no longer holds true. Perpetuating this archetype as a feasible solution to fragmented and abstracted problems is not productive — except to those who profit from selling weapons disguised as heroes. The DroneDefender is more King Canute than Clint Eastwood.

Note: For more on the topic of simplified narratives in the face of overwhelming complexity, see Adam Curtis’ Bitter Lake or The Power of Nightmares (where he applies this argument to a much larger set of geopolitical issues).

Also see ‘The John Wayne Syndrome’ for a brief exploration of the origin of cowboys.